At the start of the war, the NZAOC was part of the New Zealand Permanent Army. Still recovering from the black day of 14 July 1930, when as an economy measure all the uniformed staff less; Officers, Armaments Artificers and Armourers had been transferred to the civil service [1]. With the NZAOC’s uniformed manpower in a very depleted state, the NZAOC was slowly rebuilding with new enlistments and temporary staff, with the bulk of the Corps personnel being civilians distributed across the country at.

Providing a firm base for the provision of Ordnance support for the mobilisation and ongoing support of the NZEF and home defence units, the NZAOC never deployed any units directly for overseas service but did provide personnel for many of the critical leadership positions in the NZOC. By the end of the war, the distribution of NZAOC within NZ was [1] [2];

Created as part of the newly constituted 2NZEF in 1939, the 2NZEF NZOC was described in the Evening Post newspaper as consisting of “11 Light Aid Detachments of the New Zealand Ordnance Corps. These are numbered 9 to 19, and their part is to render assistance and effect repairs to mechanic transport and the anti-tank units” [3]. From these original 11 units, the NZOC contribution to the NZ Division grew to include.

The was initially some confusion between the use of the designation NZAOC and NZOC in the context of the NZEF. This was clarified in NZEF Order 221 of March 1941 which set NZOC as the title of Ordnance in the NZEF.

1942 saw the separation of maintenance and repair functions from the Royal Army Ordnance Corps (RAOC) with the formation of the Electrical and Mechanical Engineers (EME) in the Brutish Army[4]. The New Zealand Division followed suit and formed the New Zealand Electrical and Mechanical Engineers (NZEME) on 1 December 1942 [1] separating the repair, maintenance and ordnance stores functions of the NZOC.

The NZEF NZOC was disestablished along with the NZEF in 1946.

As with the NZEF in the Middle East, NZOC units were formed for service with the NZEF in the Pacific (NZEFIP). Initially providing a Base Ordnance Depot, Two Workshop Sections and a LAD supporting 8 Infantry Brigade Group in Fiji from November 1940. As the war progressed, the NZOC grew into a Divisional sized organisation of 23 units and detachments supporting the NZEFIP with the full range of Ordnance Services in all its operations in Fiji, New Caledonia, The Solomon Islands and Tonga [5]. The formation of the Electrical and Mechanical Engineers 1942 was not followed thru in New Zealand and the Pacific, with repair and Maintenance functions remaining part of Ordnance for the duration of the war.

Following the successful conclusion of the campaigns in the Solomon Islands, 3 NZ Division and its equipment were returned to New Zealand and disestablished. On return to New Zealand, many NZOC members were graded unfit due to rigours of the tropical campaign and returned to their civilian occupations, some were redeployed as reinforcement to 2NZEF in Italy. Some remained at the division’s Mangere base near Auckland, or at Wellington, checking, sorting and reconditioning stores and vehicles of every description before handing the division’s entire stocks of equipment and clothing over to the Main Ordnance Depot, a task that continued until September 1945 [5].

With the NZAOC and the New Zealand Permanent Army Service Corps (NZPASC) existing as part of the Permanent Army, only the NZPASC had a Territorial Army component, known as the New Zealand Army Service Corps (NZASC). From the 1930’s Light Aid Detachments (LADs) and workshop sections had been included on the establishments of ASC unit for activation on mobilisation. With the onset of war in 1939 and the mobilisation of the Territorial Army in 1940 the Quartermaster General, Col H.E Avery made the decision that the LADs were an Ordnance responsibility and the NZOC was established as the Ordnance Component of Territorial Army in December 1940 [6]. 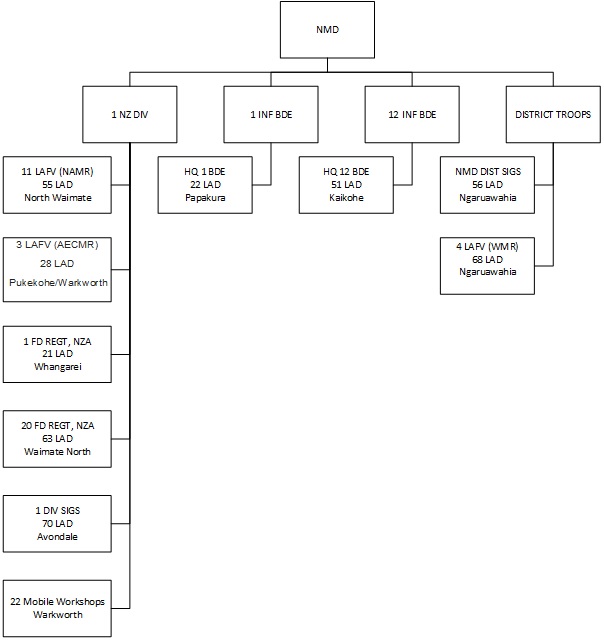 By late 1943 the mobilisation of the Territorial Forces had ceased to be necessary, and most units had been stood down and placed on care and maintenance status with a small RF Cadre. By 1 April 1944, all wartime home defence units had been disbanded [6]. Although not part of the pre-war Territorial Army the NZOC remained on establishments. In 1946 a Reorganisation of New Zealand Military Forces removed the distinction between Regular and non-Regular soldiers, and the NZOC ceased to be a separate Corps, becoming part of the NZAOC [7].

As with all the other units of 2 NZEF, units and corps badges were dispensed with, and the NZEF “Onward” badge was worn.

In the Pacific and New Zealand, the NZOC adopted the WW1 NZEF Ordnance badge which can be seen on the cover of the unofficial history of the NZEFIP NZOC and Territorial Army Unit Pennants. 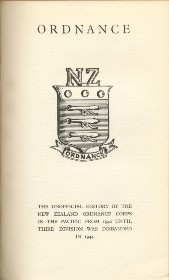