Henry Tucker (1793 – 26 August 1850) was a Royal Navy officer and the first Colonial Storekeeper for the newly established Colony of New Zealand.[1]

Tucker entered Royal Navy service at the Plymouth Yard on 29 November 1802, initially as a Shipwright apprentice under the Master Measurer. Tucker completed his apprenticeship on 14 December 1811, when he then became the Clerk to the Master Measurer, remaining in this role until 1822.[2] This was a role of some responsibility requiring above average literacy and numeracy skills and would have provided Tucker with intimate knowledge of the behind the scenes logistic workings of the Royal Navy.

With a wife to support, Tucker must have decided that a career as a Purser would be a profitable and logical path of advancement. At that time, Pursers were warranted by the Admiralty but did not require professional qualifications. [6] However, some financial surety was needed, 20 years as Clerk to a Master Measurer provided that. The duties of a Purser were to oversee supply and issue of victuals, slops and other consumables. The Purser was one of the five standing officers of the ship. (A standing officer was permanently assigned to a vessel.) The Purser’s position presented many opportunities to the canny to enrich himself, often at the expense of the crew. William Bligh of HMS Bounty Fame, served as his own Purser, with the actual work falling to his clerk.[7] The regulations of the Royal Navy demanded that individuals aspiring to become pursers serve at least one year as a captain’s clerk,[8] which Tucker competed on HMS Calliope, and in 1825 he obtained his promotion to the rank of Purser and Paymaster.[9]

In 1828 Tucker was the Purser aboard HMS Icarus, an 18-gun brig-sloop which was then part of the Royal Navy Barbados Station in the Caribbean, undertaking anti-piracy and anti-slavery patrols.

In 1840 Tucker was the Purser, and Paymaster on HMS Buffalo, which while anchored in Mercury Bay off Whitianga, loaded with Kauri spars was wrecked in a storm on 28 July 1840.[10] Given the remoteness on New Zealand at that time, Tucker was, along with the rest of the crew of HMS Buffalo stranded in New Zealand.

Six months prior to the foundering of the Buffalo and the stranding of its crew, New Zealand had become a Crown Colony separate from New South Wales. Governor William Hobson, saw the stranding of the Buffalo as an opportunity and interview members of the stranded crew, offering them discharges from the Royal Navy if they would remain in New Zealand to help build the new Colony.[11] Tucker who had become acquainted with Hobson on the outward journey from England to Australia was offered the position of Colonial Storekeeper.[12] To this Tucker consented, occupying that position from 19 Dec 1840 to 1844 when the post of Colonial Storekeeper was cancelled. Several other members of the Buffalo’s crew would also remain in New Zealand with the remainder repatriated to England on the Barque Bolina.[13] 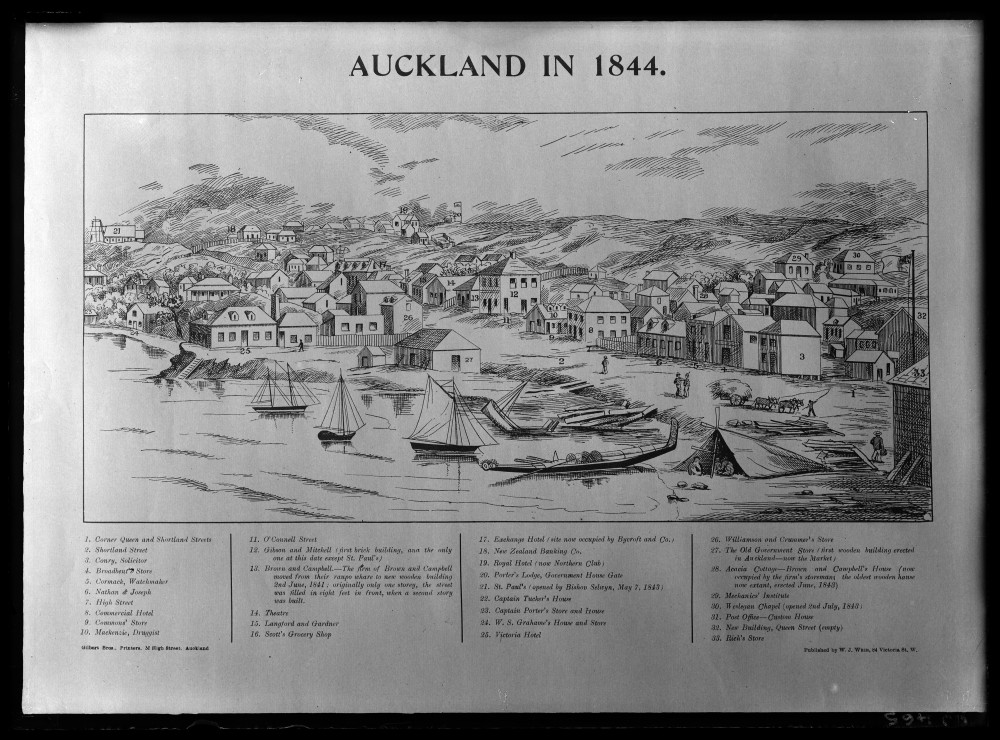 Auckland in 1844, Tucker’s house is on the extreme centre-right of the Picture. ‘Sir George Grey Special Collections, Auckland Libraries, 1-W465’

Records show that Tucker as colonial storekeeper was purchasing all manner of goods including tents, blankets, stationery, printing supplies, building product, animals and feed. A primary duty of the colonial storekeeper was to store and issue arms to settler’s militia should the need arise. By December 1842, Tucker had the following in-store:[14]

In late 1843 Willoughby Shortland, the Colonial Secretary of New Zealand deemed the position of Colonial Storekeeper as unnecessary, cancelling the position.[15] [16]  This was an unpopular move and caused some controversy in the new Colony and was questioned by the newspapers of the day as an apparent case of nepotism. Tucker was a popular individual in the community and especially in the light that as soon as he was made redundant, a Mr Leach was appointed, under a different job title to the office of Colonial Storekeeper.[17] The duties of the Colonial Storekeeper were in time assumed by the Superintendent of Public Works. No longer Colonial Storekeeper Tucker remained in Government service first as the Chief Clerk Audit from 17 Feb 1844,[18] and on 24 July 1844, Tucker was appointed as the Chief Clerk, Governor’s private affairs.[19] [20]

Late in 1846, Tucker returned to England, where he was shortly afterwards appointed Paymaster and Purser of HMS Acheron, a Hermes-class wooden paddle sloop of the Royal Navy. While HMS Acheron was undertaking a coastal survey of New Zealand, ill-health compelled Tucker to relinquish his post aboard this vessel. Years of service had significantly impaired Tucker’s constitution, which rapidly gave way, and for the last, three or four months suffered with fortitude and resignation despite being in great pain and died on 26 August 1850 in Auckland, New Zealand.

Having been so recently on active service and a much respected public figure in the Colony, Tucker’s funeral was a marital affair. The coffin, covered with the Union Jack, and surmounted with his hat and sword, carried to the grave by a party of Royal Navy Blue Jackets, landed for that purpose from HMS Fly. The funeral party included his son, the Governor of the New Zealand Colony, senior military officials and a long and highly respectable train of civilians and former shipmates from HMS Buffalo. Tucker is buried at the Symonds Street Cemetery in central Auckland.[22] [23]

“The late Mr Tucker may, without the smallest approach to monument or eulogy, be affirmed to have been a worthy, upright man. Sailors are accurate judges of character, and the soubriquet – “Honest” Ben Tucker” – which, according to Captain Edward Stanley was the appellation given him by his messmates, proved the high estimation in which he was held.”

Sadly, although buried in the Symonds Street Cemetery, Tucker’s tombstone can no longer be found in its original position and has not been seen for some years.

As the first colonial storekeeper of New Zealand, Henry Tucker has been adopted as the godfather of the New Zealand Army’s Supply Trades.[25] The former Royal New Zealand Army Ordnance Corps named its unofficial Senior NCO, Warrant Officer and Officer social and professional development club “The Henry Tucker Club” a tradition which has carried over to the Royal New Zealand Army Logistic Regiment. Today his name adorns lecture rooms at the Supply Wing of the NZ Army Trade Training School and is also used as the name of a combined exercise and field phase of the Supply Technician RNZALR, Intermediate and Senior Supply courses.[26]