David Orr was born in Wellington on 13 January 1935 a son of John and Elizabeth Agnes Orr (nee Graham) who came from Ballymena and Randalstown, County Antrim, Northern Ireland. Dave’s father was a policeman and at the time of Dave’s enlistment was stationed at Kaponga near Hawera. Dave shared his home life with two brothers and a sister and was educated at the Hawera Technical High School. He left after reaching Form Five to be employed as a concrete worker by Mr J.A. Stenning of Hawera. Dave was called up for service under the Compulsory Military Service scheme and after the initial training became a Territorial Force soldier. He reached the rank of Lance Corporal before joining the Regular Force. On 1 August 1957, Dave married Beverly Ann Barnett at Taumaranui. Dave would have three children, Gary John (b. 20 Jan 1958, Taumaranui), Susan Beverly (b. 22 Nov1959) and Debra Kay (b. 21 Feb 1961, Palmerston North).

Dave enlisted into the Regular Army in August 1957 and after a basic refresher training course, followed by advanced corps training at Waiouru was posted to the 1st Battalion, New Zealand Regiment. This Battalion was the replacement for the Special Air Service Squadron which had been in Malaya from 1955. The Battalion paraded through Wellington in November 1957 prior to its departure for Malaya. It was transported to Singapore on board the troopship TSS CAPTAIN COOK (which had been used for bringing migrants to New Zealand after WW2) arriving in December. On arrival in Malaya many of its personnel were sent just across the causeway from Singapore to Johore State for acclimatisation and jungle training mainly at the Jungle Warfare School at Kota Tingi. In March 1 NZ Regiment moved to Ipoh, and relieved the 1st Battalion the Royal Lincoln Regiment which had been on operations in North Malaya in the State of Perak.

Dave was posted to active service as the Battalion was employed on counter-insurgency duties in an effort to round up remaining terrorists which were the hardcore members of the Malayan Communist Party. The Battalion was involved in deep jungle patrols of up to platoon size as the Emergency was still being fought. Apart from other duties, Dave was involved with setting up the Pipe Band of 1 NZ Regiment whilst in Malaya. (During this tour, while on patrol, one of the members of the band was hauled out of his bed in the jungle by a tiger and severely injured.) On 5 August 1959 Dave Orr emplaned on an RNZAF Hastings aircraft at Singapore and returned to New Zealand. For his service in Malaya Dave was awarded the General Service Medal 1918 clasp ‘Malaya’ 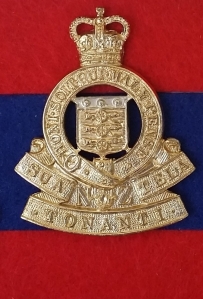 Dave Orr changed Corps to RNZAOC upon his return to New Zealand in 1959, became a Storeman/Clerk and was posted to Central District Ordnance Depot (CDOD), Linton, where he was also involved with forming the Linton Camp Pipe Band which now no longer exists. He was promoted Corporal during August 1962 and Sergeant during April 1967. He was next posted to Waiouru Sub-Depot of CDOD, promoted Staff Sergeant in 1967 and WO2 in 1970. WO2 Orr was posted back to Linton Camp in 1974 to 1 General Troops Workshops (RNZEME) stores section before returning to CDOD in 1975 when he was promoted WO1.

WO1 Orr was awarded the Long Service and Good Conduct Medal (Military) on 1 August 1975. He was posted to Trentham Camp during 1977, firstly to 1 Base Ordnance Depot (later 1 Base Supply Battalion then 5 Logistics Regiment) then to the appointment of RSM, the RNZAOC School. He was later appointed a Conductor in the RNZAOC, a distinction much prized and not granted lightly within the RNZAOC. During 1977 he initiated the setting up of the RNZAOC Warrant Officers’ and Sergeants’ silver collection now valued at thousands of dollars.

While posted to the New Zeland Advanced Ordnance Depot in Singapore, WO1 Orr was awarded the Meritorious Service Medal on 29 April 1982

The citation for the Meritorious Service Medal reads in part as follows, “Warrant Officer Orr has given dedicated and reliable service not only to his Corps but also the Army as a whole. He has shown his ability to understand and communicate with soldiers at all levels and has portrayed an image of a “Soldier Friend”. Young soldiers find WO1 Orr easy to approach and always willing to help. In all his dealings WO1 Orr puts others needs before those of his own. His exceptional service and conduct were recognised in 1975 when he was awarded the Long Service and Good Conduct Medal.

In recognition of an outstanding career WO1 Orr has been awarded the Meritorious Service Medal. This medal is only awarded to senior NCOS with at least 21 years service. Only 20 serving personnel may be awarded it at any one time and then only those soldiers who have performed good, faithful, valuable and meritorious service and possessed of an irreproachable conduct throughout the qualifying period. The Meritorious Service Medal admirably compliments his earlier award of the Long Service and Good Conduct Medal.”

Dave was actively involved with Camp and Corps sport during his career both as a player and administrator. Dave Orr retired from the Army in 1985 and was employed as the Property Officer (a civilian appointment) at Trentham Camp until his retirement.

Dave passed away on the morning of 26 March 2020 after a long illness.

A package equivalent to 15% of GDP, as announced by the Chancellor of the Exchequer on 17 March 2020, is of the magnitude of support for the war effort.

In 1914-18 there were still gold reserves, gold mined in Empire nations and investments overseas. One and a half centuries of industrial growth, during most of which Britain had been the workshop of the world, had built up substantial resources. Even in 1914, when Germany and the USA had caught up in terms of industrial production, British shipyards produced one third of the world’s ships and the cotton mills of Lancashire produced enough yarn and textiles to cloth half the world.[1] The war came at a great economic and well as human cost; some £11,325 million was spent, including loans to Russia which were never repaid. About one third was raised through taxation, £500 million from the sale of investments…