With Japan expanding into China and war clouds brewing over Europe, Defence in New Zealand had by 1938 started to pull itself out of the years of forced inactivity and neglect that had been the hallmark of the early 1930s. By mid-1939 re-equipment and rearmament was underway with many new weapons in the process of being introduced into service with more on order. With so many new armaments coming into service alongside the existing inventory, there was also ammunition which required correct storage and accounting. Responsibility for the management of ammunition was divided between the Royal New Zealand Artillery (RNZA) and the New Zealand Army Ordnance Corps (NZAOC). To meet the growing needs of the New Zealand Army, both organisations rapidly expanded in manpower and infrastructure from having a minimal ammunition capability in 1939, finally combining to form a single NZAOC organisation charged with responsibility for managing New Zealand Army ammunition depots in 1945.

On the formation of the NZAOC in 1917, the Royal New Zealand Artillery (RNZA) Ordnance Section at Fort Ballance passed to NZAOC control. Becoming the NZAOC Ammunition Section, it continued with its task of storing, inspection repairing and refurbishing  Ammunition as a uniformed branch of the NZAOC under the control of the RNZA.  Located at Watts Peninsular on the north end of Wellingtons Miramar peninsular, the ammunition infrastructure consisted of 19 magazines, one store and a laboratory situated across the peninsula at Shelly Bay, Kau Point, Mahanaga Bay, Fort Ballance and Fort Gordon. These were not purpose-built ammunition magazines but repurposed submarine mining and coastal artillery fortifications dating as far back as the 1880s. In the case of Kau Point and Forts Ballance and Gordon, the large 6 and 8inch disappearing guns had been removed in the early 1920s and the gun pits roofed over to become ad-hoc magazines. This accommodation was far from ideal as temperature, and moisture control was not able to be adequately controlled, resulting in potential damage t ammunition stocks.[1][2][3] 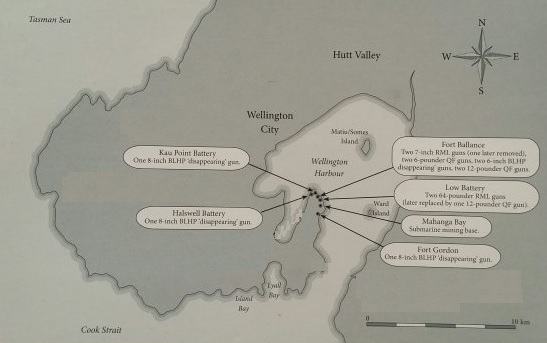 A smaller Ammunition section was also maintained in Auckland during the 1920s, who along with some staff from Fort Ballance Ammunition Section was transferred to the New Magazines at HopuHopu Camp[4] on the competition of their construction in 1929.[5]  Envisaged to be the principal ammunition depot for New Zealand, Eleven magazines and a laboratory were constructed between 1925 and 1927.  Built into a hillside, the magazines were constructed of concrete, with double walls, which formed an inspecting chamber. The intent of the inspection chamber, was for sentries to observe thermometers, and by consulting a chart, adjust the ventilation to maintain the stock at optimal temperatures. Entirely reverted into the hill and faced by an embankment the Hopuhopu magazine s designed in such a way so that if there were an explosion, the blast would be contained.[6] 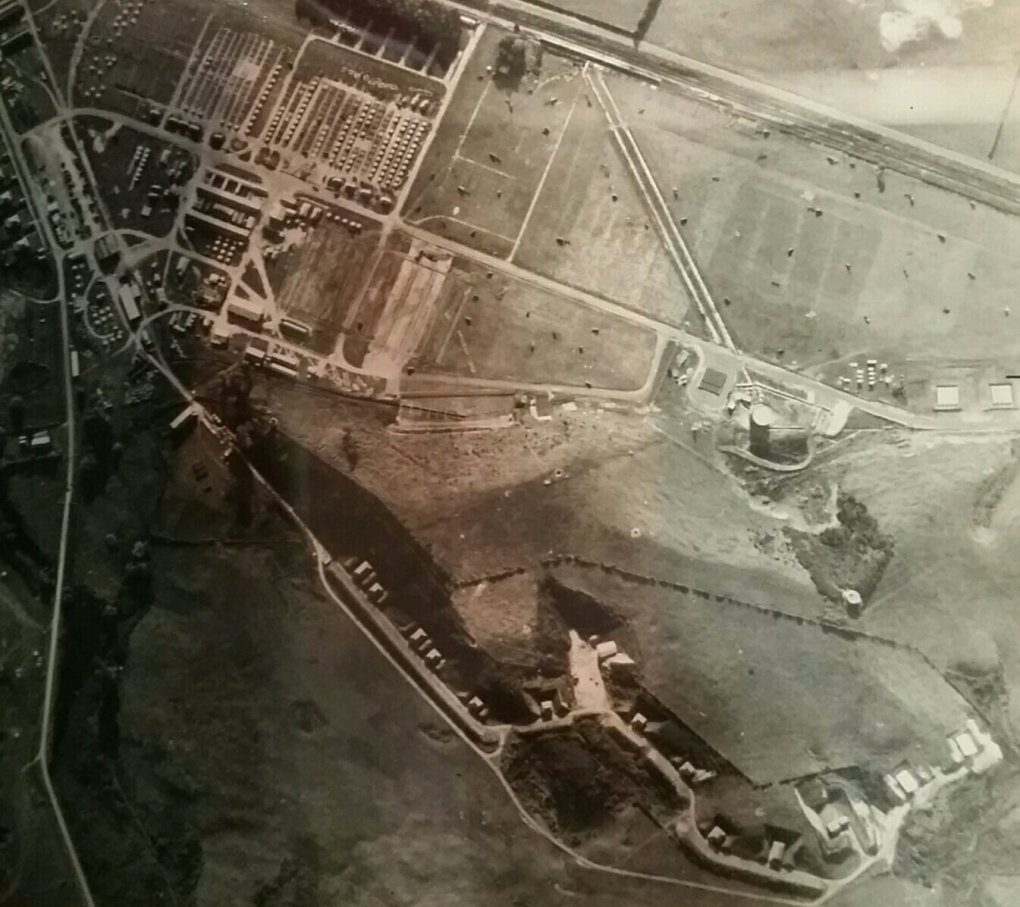 When New Zealand entered the war in September 1939, The responsibility for ammunition was shared between the RNZA and the NZAOC;[8]

Ammunition Facilities shared by the RNZA and NZAOC consisted of ;

With a significant amount of ammunition being received from overseas, it became a matter of urgency that the establishment of the NZAOC Ammunition section is increased and additional magazine accommodation constructed. Immediate relief was gained by the construction of eight magazines at Burnham Camp and the taking over of 6 Magazines and a Store at the Ohakea Airforce Base in the Manawatu. Both the Burnham and Ohakea magazines had been constructed as part of a pre-war expansion plan. Ten magazines had been built at Ohakea, with their construction completed in 1940 and construction of eight magazines at a location north of Burnham Camp was started in 1940 with building completed by May 1941. [11]

By October 1941 the NZAOC Ammunition Section establishment and Magazine situation was;[12]

Fort Balance would continue to be utilised and an Ammunition Depot throughout the war and in October 1942 held the following stocks as part of the Wellington Fortress area;[13]

Further construction of magazines was planned with the War Cabinet granting expenditure in September 1941 for an extensive magazine building programme at the following locations;

Designed by the PublicWorks Department consultation with Army Headquarters, six designs were utilised, known as type A to F;[14]

Significant establishment changes were also proposed with an increase of the NZAOC establishment to 3 Officers and 62 other ranks including all civilian ammunition staff being placed into uniform retired.

Although New Zealand had been at war for just over two years, up to December 1941, it had been a distant European war not requiring the full mobilisation of New Zealand. The near-simultaneous attacks by Japan against Malaya, the Philippines and speed of the Japanese advance southwards forced New Zealand on to a total war footing with the full mobilisation of the territorial army and the formation of additional Divisions for home defence and service in the Pacific.[15]

With the entry of Japan into the war, new magazines were approved. Due to the increased threat posed by Japan, the latest magazines were designed with the intent of providing additional protection and were known as types M, P, R1, R2 and R3;[17]

With construction started in early 1942, wartime conditions, competition for material and manpower priorities and the challenging and isolated locations of some of the sites meant that the final construction was not completed until late 1944.  The final tally of magazines constructed across eleven locations was;[18]

During the same period, magazines and other ammunition infrastructure was also constructed for the Navy, Air Force and United States Forces in many locations across the country of which some would also be utilised by the NZAOC

The increase of Ordnance Depot Establishments

Followed by the completion of the following magazines in October 1943;

Construction of Makomako completed in March 1943.[21]

Development of Glentunnel completed in August1943.[23]

Development Authorised in Decemberr1942 with development completed during 1943.[24]

Selected as the site of an ammunition Depot in early 1942. Seventeen temporary Wooden Ammunition Shelters and five temporary wooden explosive stores were constructed along with a quantity of supporting infrastructure including a road aptly named “Ammunition Track” which is the only trace left today. Possibly due to its close proximity to the coast and the threat of Japanese Air raids, the permanent Ammunition depot was built further inland at Alexandra.[26]

Dates for the completion of the construction of the Ardmore, Ngawahiwaia, Kelm’s Road and Kuku Valley magazines is not detailed in the Public Works history but would have been during 1943.[27]

Construction of the following was completed by May 1944;

Construction of the Belmont Ammunition area began in November 1942 and was completed by November 1944.[29]

From mid-1945 discussions start to take place on the post was the shape of the NZAOC. Some thought was given to returning the NZAOC to its pre-war status as a predominantly civilian organisation. Reality prevailed the future of the NZAOC was assured as a feature of the post-war army. It was estimated that there were at least three years of work required in inspecting and refurbishing ammunition returned from units that had been demobilised, that was in addition to maintaining existing stocks of unused ammunition.[30] Proposed establishment for NZAOC Ammunition units would see the first widespread use of the terms IOO (In the context of the modern Ammunition Technical Officer) and Ammunition Examiner (Ammunition Technician). 1945 would see the completion of the ammunition infrastructure works first authorised in 1941.

Transfer of Ammunition and Equipment Section to NZAOC

Since before the Defence Act of 1909, which created the framework of the modern New Zealand Army, there had long between a division of responsibilities for the Management of Ammunition. Traditionally the provision, allocation, receipt, storage and issue of Gun (Artillery) Ammunition had been an Artillery responsibility, with the Management of Small Arms Ammunition the responsibility of the Defence Stores/Ordnance Corps. 1 June 1945 the NZAOC assumed responsibility for the management of all Army ammunition. The Artillery element responsible for the management of Gun Ammunition,  the Ammunition and Equipment Section was transferred from the control of Army Headquarters to the Chief Ordnance Officer. As a result of the transfer, 11 Officers and 175 Other Ranks of the Royal New Zealand Artillery were absorbed into the NZAOC establishment.[31]

On the 15ht of November 1945, the Chief Ordnance Officer took up responsibility for the care, maintenance, accounting and storage of all ammunition and explosives.

Control of ammunition would be undertaken by;

The IOO Section, administered by the CIOO was responsible for;[32]

The Ammunition Section was responsible for;[33]

[4] At different times referred to as Waikato or Ngawahawia Camp

The concept of Colonel Commandants in English military tradition dates back to the seventeenth century when members of the aristocracy, would at their own expense raise and equip regiments for service with the crown, with the owner and head of the regiment as appointed colonel.[1] As the British Army evolved during the early eighteenth century, the arrangement of ‘ownership’ was abolished and the Colonels lost their positions to Lieutenant Colonels who were selected to lead based on their ability. However, the custom of a regiment having a Colonel (or Colonel Commandant) was maintained, with the Colonel Commandant regarded as the domestic head of the regiment, in which they took a paternal interest.

Approval for the first Colonel Commandant of the Royal Army Ordnance Corps was granted by the British Army Council in 1921, with Major General Sir John Steevens accepting the position.[2]  The RNZAOC would follow the RAOC lead and appoint a Colonel Commandant Twenty Eight years later when the New Zealand Army updated the regulations on the appointment of Colonel Commandants, Colonels and Chief and Colonels of Regiments in 1949.[3]

Amendment No. 62 to the Regulations for the New Zealand Military Forces 1927 published in NZ Gazette No 20 of 28 April 1949 detailed that duties and the responsibilities of Colonels Commandant were to: