I was recently made aware of this photo of New Zealand Supply Depot Staff at Zeitoun Camp, Egypt in 1915, it has been taken from the album of Major Alexander Charters, CMG, DSO, of the Wellington Infantry Battalion. The picture shows a group of men, most likely of the No 1 Depot Unit of Supply (DUS) New Zealand Army Service Corps (NZASC).

Based at Zeitoun Camp from August 1915 until 16 March 1916 No 1 DUS was responsible for the supply and distribution of over 28000000 Kilograms of forage, foodstuffs, firewood and other goods to its subordinate units during that time.  It is on the surface an unremarkable picture but shows the variety of head-wear and uniforms at the time. Most are wearing Wolseley pattern sun helmets, two are wearing Forage Caps, two individuals are wearing felt hats with NZASC Khaki/White/Khaki Puggaree, one is wearing a Mounted Rifles bandoleer. Most interestingly of all is an individual wearing Lemon Squeezer hat,  with an unidentified Puggaree, (most likely an infantry Puggaree) with a British Army Ordnance Corps (AOC) badge.

The question has to be asked, why is a New Zealand soldier in 1915 wearing a British Army Ordnance Corps badge?

At the time of the photo, New Zealand did not have an Ordnance Corps, and one would not be formally created in the NZEF until February 1916,  (see NZAOC 1916-1919) and at home until 1917. (NZAOC, 1917-1923)   In the context of the NZEF,  ad-hoc Ordnance Sections had been established as staff under the New Zealand Division Deputy Assistant Director of Ordnance Services(DADOS). On the arrival of the NZ advance party in 1914, Sergeant (later Major) Levien had been attached to the British Ordnance Corps Depot at the Citadel in Cairo to study the Ordnance systems in use with the Imperial forces in Egypt to integrate New Zealand into the British Supply System.

Early in 1915 to support the Zealand Forces, Levien now promoted to Lieutenant established a New Zealand Ordnance Depot in Alexandra at No. 12 Rue de la, Porte Rosette and a warehouse at Shed 43, Alexandra Docks.

Given the need to outfit New Zealand units as they arrived in Egypt, and as the New Zealand Forces returned from Gallipoli, there would have been a significant effort to refit, refurbish and re-equip units as they reorganised for future service in France and the Middle East. This would have put a considerable strain onto the nascent New Zealand Ordnance Corps, requiring in addition to the original DADOS staff, the drafting in of additional soldiers with clerical, stores and maintenance experience from within NZEF. Records analysed so far identify 13 Other Ranks (Private to Company Sergeant Major), who joined the NZAOC on its formal creation in Feb/Mar 1916, who would have quite possibly been working in  Ordnance roles since 1915. 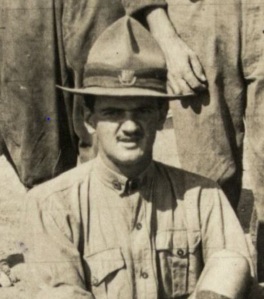 Unlike the soldiers of the NZASC who deployed as part of the established NZASC organisation and wore the NZASC cap badge.  Soldiers posted to NZ Ordnance, deployed from NZ on the strength of the unit or Battalion that they had enlisted into and were posted to the Ordnance establishment after their arrival in Egypt, and before establishment of the NZAOC in Feb 1916 would have retained the cap badge of their parent unit. I am sure that this would have caused some confusion and based on the evidence of the Zeitoun photo at least one Ordnance soldier utilised a British AOC badges to identify himself as Ordnance. 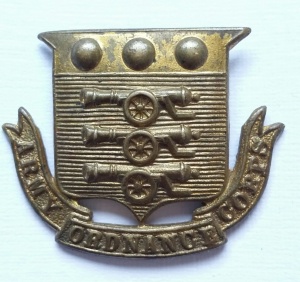 Judging by the puggaree on this soldiers lemon squeezer hat, this soldier has transferred to Ordnance from one of the New Zealand Infantry Battalions and quite possibly retains his parent units collar badges. Unfortunately, the quality of the picture doesn’t provide enough detail to identify the group with any certainty.

Until further photographic evidence or written documentation is discovered, this picture raises more questions than answers, but this photo does provide a start point for later research to unravel this cap badge mystery.  I have seen some examples this badge with the letters “NZ” affixed on top of the shield, are these modified badges part of the same story?

Eventually, the NZAOC in the NZEF would adopt its own badge either in 1916/1917 and on the creation of the Home Service NZAOC in 1917 the adoption of their own badge. Use of both badges would evolve several times into the 1955 pattern that would serve the RNZAOC until 1996.