Percy Clarence O’Hara was born at Whanganui on the 16th of June 1895 to William and Agnes O’Hara and was the youngest of six children, having three brothers and two sisters. O’Hara was a second generation New Zealander, with his father William born in Greytown in 1856 and his mother Agnes was born at Nelson in 1857[1].

O’Hara’s father who was a grocer at Whanganui died at the age of 49 in 1907, O’Hara completed school to at least Standard Four. On the declaration of war in 1914, O’Hara was self-employed as a Commission Agent[2], and was a member of the  Queen Alexandra Band of Whanganui[3].

O’Hara voluntary enlisted into E Company of the 8th Reinforcements at Trentham Camp on the 24th of August 1915. Transferred into the New Zealand Rifle Brigade Headquarters on the 24th of Septemeber 1915, O’Hara embarked for Overseas service on the 13th of November 1915, arriving at Suez on the 21st of December 1915[4].

Remaining with the NZRB Headquarters at Zeitoun, O’Hara transferred for duty with the Army Ordnance Corps personnel on the 21st of December 1915. Posted to A Company of the 1st Battalion on the 27th of January 1916, O’Hara was seconded for duty back to the Brigade Headquarters and promoted to Sergeant on the 15th of February 1916[5].

Formally transferred into the New Zealand Army Ordnance Corps on its formation in February 1916, O’Hara was seconded for duty with the 1st battalion of the NZRB on the 26th of February 1916[6].

O’Hara embarked for France from Alexandra on the 6th of April 1916. Soon after arrival in France O’Hara was detached to the Ordnance Stores on the 20th of April 1916. Few details of O’Hara’s activities over the next few months exist. The NZ Division was committed to the Armentieres and Sailly sectors from May 1916 to February 1917 with the NZRB undergoing a reorganisation in January 1917. There is little doubt that with his Ordnance role within the NZRB, O’Hara was well employed with the administrative functions required to maintain a fighting force in the field[7].

On the 4th of April 1917, while still serving with the Headquarters of the 3rd NZ Rifle Brigade O’Hara was admitted into No 2 New Zealand Field Ambulance. Transferred to No 2 Casualty Clearing Station on the 8th of April 1927 O’Hara passed away due to the effects of Broncho-Pneumonia at 8.25am on the morning of 11 April 1917[8][9][10]. 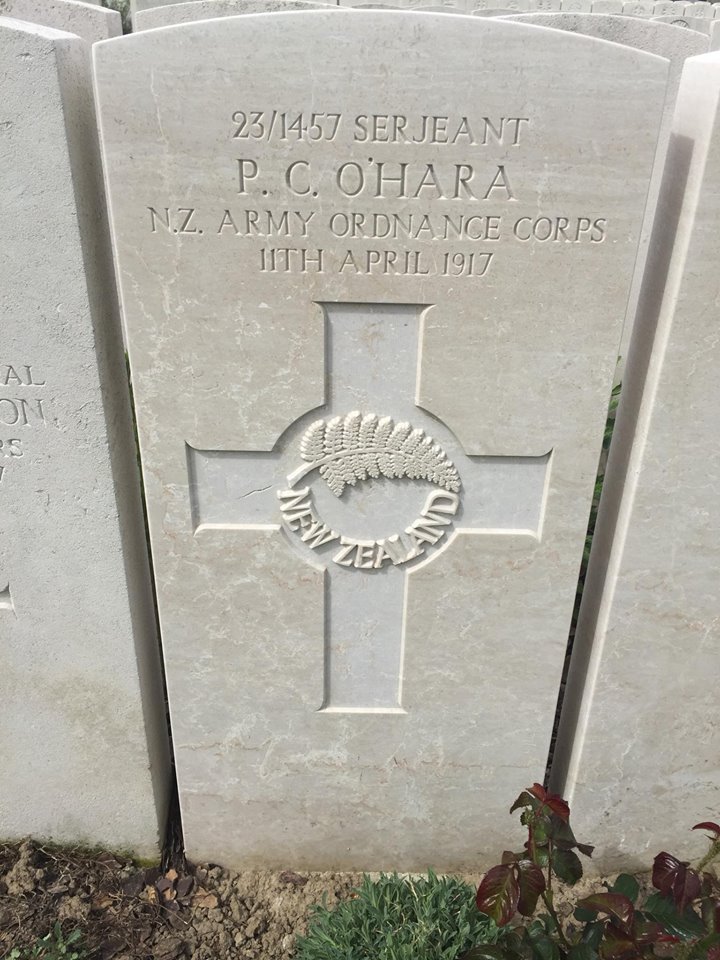 Tragically O’Hara family would be struck with tragedy twice. In 1918 O’Hara’s brother Claude Nelson O’Hara was called up for service, and while training as part of the 48th reinforcements, Claude O’Hara was struck down with Influenza and passed away at Featherston Camp on the 16th of November 1918[12].