Taking a break from telling the story of the New Zealand Ordnance Services, this article examines how the loss of war is memorialised in many New Zealand communities.

The First World War was a traumatic and defining event for the young county of New Zealand with over one hundred thousand men and women serving during the war. The effects of the war would be felt across all sectors of New Zealand society as New Zealand suffered a fifty-eight per cent casualty rate. As the nation collectively grieved, one way it came to terms with the tremendous loss of life was in the erection and dedication of war memorials across the nation. One example of such a memorial is the St Andrew’s Presbyterian Church Memorial Sunday School building at Church Street in Palmerston North, a building dedicated to the memory of the thirty-six members of the congregation that did not return from the war.  The building ceased to serve its original role many years ago and is now a bridal studio located in what is now a side street adjacent to Palmerston Norths only mall. However, the memorial plaque remains as a reminder of the losses inflicted onto the local community by the First World War. This article will focus on four of the men from the St Andrews congregation, and examine their’ life geography’ to tell their story of where they came from and the community that they lived-in.

In the years from 1910 to 1923, the congregation of St Andrew’s Presbyterian Church maintained an average congregation of 306. So given that the church had lost 11.6 per cent of its congregation in the war, it was a fitting and appropriate memorial to those men that the new Sunday School building was dedicated in their memory in 1923. [1] The memorial plaque is a simple marble tablet with the dedication and the names of the fallen engraved and filled in with lead lettering, parts of which are starting to deteriorate. The Names are in alphabetical order with Surnames followed by post-nominals and then initials, unfortunately not all the initials are entirely correct, leading to a disconnect between the memorial and records. 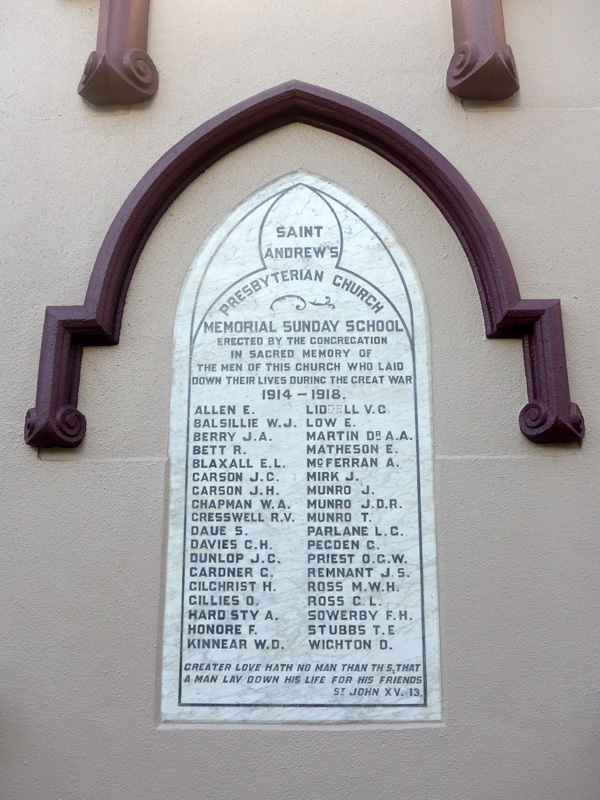 To determine the correct names and to construct the comparative table below (Table 1), verification of the names on the memorial was in the first instance checked against records held online by the Commonwealth War Graves Commission (CWGC).[2] From the data held by the CWGC, the individual’s service number was identified, which in turn was then used to extract the individual’s personnel file from either Archives New Zealand,[3] or the National Archives of Australia.[4]  To simplify the reading and interpretation of the Individuals service record, a search of the records held in the Auckland War Memorial Cenotaph website would often provide a transcript of the individual’s service record.[5]  Although the service record is robust and provides all the essential information on a serviceman’s military service but little on the service members his life outside of the military. Two useful websites offered additional information on the civilian life of the servicemen, the National Library of New Zealand Papers Past website,[6] and the pay for use website Ancestry.com, both these sites contribute in filling in many of the gaps found in the service records.

This combination of multiple sources, which in some cases provided useful cross-referencing of information and the inclusion of new information created the table at appendix 1; providing details on the thirty-six men including;

Given the range of information and geographic data that can be filtered from such a table, for this research, only four servicemen were examined in detail. Table 2 details four men who based on some simple criteria, became candidates for this study. The criteria are based on their situation at the time of their enlistment, in that they; were all living in suburban Palmerston North, they were between the ages of 20 and 26, and they all belonged to the same Territorial Army Unit.[7]

Robert Carville Bett joined the NZEF on 10 December 1914 as part of the initial surge of enthusiastic volunteers in the early years of the war. Born in Palmerston North, Bett was the older brother of three sisters. A coachbuilder by trade, Bett was an active member of St Andrews Church Presbyterian Church, where he contributed to the church as a lay preacher and secretary and sub-leader of the Bible Class. Bett would also fulfil his compulsory military service commitment by serving in J Battery of the New Zealand Field Artillery (NZFA). Deploying on the 2nd Reinforcements of the New Zealand Expeditionary Force (NZEF), Bett would serve with the Veterinary Corps in Egypt and be invalided home in November 1915 after contracting typhoid fever. During his time in Egypt, he continued his civic spirit by contributing to the work of the Egyptian YMCA organisation in providing welfare services to the New Zealand troops.[8]

Returning to New Zealand and regaining his fitness, Bett was back in camp in March 1916 and offered a commission in both the Veterinary and Army Service Corps, Bett, however, chose to join the infantry as a private soldier. Leaving with the Fourteenth Reinforcements in June 1916, Bett wold serve with the Otago Infantry Regiment of the New Zealand Division in the Battle of the Somme and would die as a result of wounds during the Battle of Messines on 14 June 1917. Bett’s death was felt hard in Palmerston North as he was a well-admired young man. Regretfully Bett was the sole male child of his family, leaving it without a representative for the future.[9]

James Henry Carson would be called up by Ballot in April 1917 and would serve in Trentham and Featherston camps, succumbing to the Influenza in November 1918. James was born in Wellington and was the third child in a family of four boys and a girl. The Carson family had moved to Palmerston North by 1907 when the fourth child, Sydney, died at the age of thirteen in a tragic shooting incident.[10] The Carson family patriarch James Senior was a Cordial Maker and proprietor of the business of ‘Carson and Son’ which James was an also an employee. James would also meet his compulsory military service commitments by serving in J Battery of the NZFA.[11]

James married Linda Edwards at St Andres Church on 14 October 1917.[12]  James was called up for Military service by Ballot, and when serving on the Artillery Details at Featherston Camp, Linda passed away after a short illness on 29 June 1918.[13] The tragedy of this death would have only compounded the family’s pain as they had only received notification that John Carson, the Oldest of the Carson children, had died in France a month earlier.[14] James continued to train at Featherston, but sadly on the day after peace was declared, Carson died of Influenza at Featherston Camp on 12 November 1918.[15]

Vernard Clifton Liddell was from a long-established Foxton family and was the second child in a family of four boys and one girl. A competent Hockey player, Vernard had played representative hockey for both the Manawatu and Wellington districts. Meeting his compulsory military service commitments, Liddell would serve in J Battery of the NZFA.[16]  At the time of his enlistment, he was working as a clerk for the agricultural sales firm of Messrs Barraud and Abraham’s on Rangitikei Street. Liddell’s sister Rita would later be working for the same firm in 1939.[17] Liddell would enlist into the NZEF in October 1915 and see service with the New Zealand Division in France until 24 April 1918 when he died of wounds as a result of combat operations.[18]  Two of Liddell’s brothers would also serve in the NZEF during the war.

Owen George Whittaker Priest was the eldest son in a family of two boys and two girls, originally from Akaroa, the Priest family would move north, first to Inglewood and the settling in Palmerston North by 1910. Like his peers, Priest would also complete his compulsory Military service obligations with J Battery NZFA and at the time of his enlistment was working as a clerk for the Stock and Station agents, Abraham and Williams Ltd.[19] Liddell would be one of the earliest volunteers for the NZEF, enlisting on 11 August 1914. Liddell would see service at Gallipoli and France. Having survived Gallipoli, Liddell was killed in action in the early days of the N.Z. Divisions actions in France on 9 July 1916.[20]

In this small church community of about three hundred, it is certain that almost all of these thirty-six men were acquaintances of each other, and their families were connected in some manner, with the loss of these men was felt collectively across the community. This sense of community is highlighted in the examples of Bett, Carson, Liddell and Priest. As well as their connection to the church, they all lived and worked in proximity to each other, and as Territorial soldiers would have trained and socialised together. So next time you pass a memorial such as this, please don’t ignore it as a relic of an event long forgotten but instead take the time to reflect on the men and women listed on the memorial and the supreme sacrifice that they made.