Transferring into the RNZAOC from the Artillery in 1946, Eric (Gumboots) Gerard became a well-known officer throughout the RNZAOC. In the time up to his retirement in 1972, Gerard served in all three of the ‘Districts’; Northern, Central and Southern.  During his service, he was witness to the construction of the various Ammunition Areas during the War years; the creation of the standalone Ammunition Depots in the late 1940s; and then their absorption into the Ordnance Depots as Ammunition Sub-Depots during the 1960s. Gerard Acquired the nickname “Gumboots” because of the many hours he spent in the wet and mud blowing up ammunition.

Gerard was born in Wellington on the 26th of April 1917. In 1938 when working as a Hardware assistant at Palmerston North [1], Gerard joined the Territorial Force New Zealand Artillery (NZA). Due to the worsening war situation and the growing threat from Japan, Gerard was called up by ballot for full-time service with the Territorial Force in 1940[2].  Gerard served with the 10th Heavy (Coast) Regiment when he was selected for Officer Training in 1941. Graduating from 11 Officer Cadet Training Unit (11 OCTU) as a 2nd Lieutenant on the 1st of July 1942[3]. On Graduation, Gerard was posted to the New Zealand Temporary Staff and promoted to Lieutenant on the 9th of October 1945 in 1946. [4] Gerard was based at Wellington serving with the RNZA Ammunition and Equipment Section.[5]

Up to 1946, the RNZA managed ammunition, explosives, Coast Artillery and specialist equipment and stores with the Ammunition and Equipment Section based in Army Headquarters. In 1946, this responsibility included some manpower, including Gerard was transferred to the NZAOC [6].

From 1946 Gerard was based out of Trentham and spent time working at the Belmont and Waiouru Ammunition Areas. In 1949 he became the District Inspecting Ordnance Officer (DIOO) at Headquarters Central Military District.

Posted to Hopuhopu in 1953, Gerard remained there as the Northern Districts DIOO until 1957, when he was posted to the Southern Military District (SMD) as DIOO.

It is during his tenure as SMD DIOO that Gerard became regarded as the most “Confederate” of Ordnance Officers, proudly displaying the confederate ‘Stars and Bars’ flag in his office. 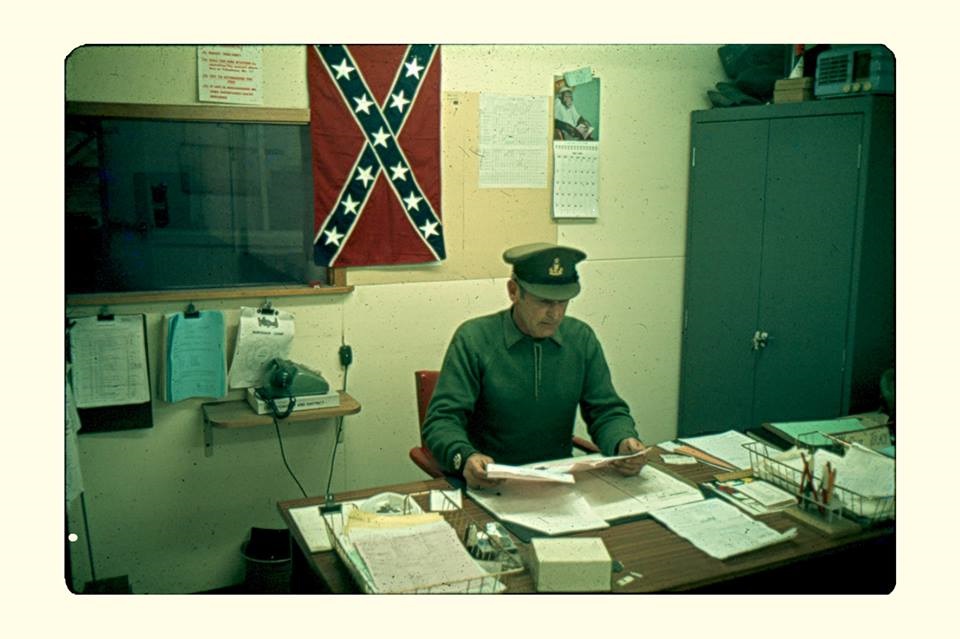 In 1961 the modern Ammunition Technician trade speciality was created when new titles were adopted and;

Remaining as DATO SMD until the reorganisation of 1968[8], Gerard was then posted to 3 Central Ordnance Depot (3COD) as the Second in Command (2IC). During his last year of’ service, he was the Officer Commanding 3 COD.

On Friday, 24 March 1972, the RNZAOC farewelled Major E.D Gerard on his retirement from the New Zealand Army after 30 years of service as an Officer plus two more years in the ranks. Gerard remained in Christchurch and passed away on the 21st of July 2003. 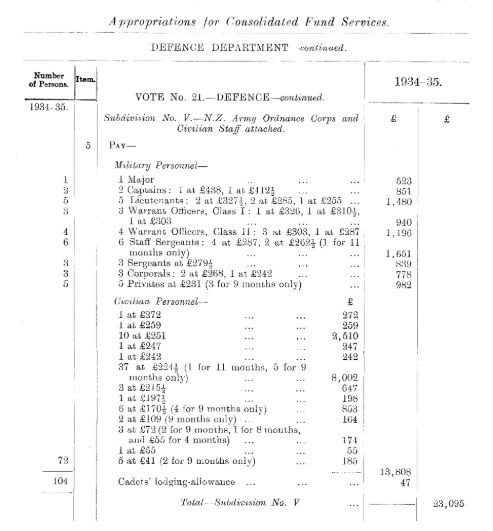 It had not been possible, for financial reasons, to follow any progressive policy during the past few years in the appointment of officers to the NZAOC. The officers of the corps are of two classes;

The small numbers involved made it essential that appointments be made with careful regard to age and the necessity for technical training abroad. It was planned that two junior officers —one for administrative work and one for technical work—would be appointed as soon as funds permit, with one officer to attend the Ordnance Mechanical Engineers’ Course in England in 1936.  Special attention was being paid to the provision of armourers and instrument artificers. The position as regards armament-artificers was satisfactory, but appointments of young men for training as armourers and for instrument-repair work needed to be made as soon as practicable.[4]

The NZAOC was responsible for;

Equipment and stores required for the Territorial Force had been maintained during the year in serviceable condition. Very careful attention had been paid to the inspection and testing of small-arms ammunition, some of the older stocks of which showed signs of serious deterioration. All ammunition issued for use in rifles was carefully tested before issue, and ammunition found unfit for rifles was either issued for use in machine guns or broken up, according to its condition.

The situation regarding equipment and stores was far from satisfactory. Financial limitations had made it impossible to build up an adequate reserve of equipment and stores or to maintain those reserves that existed. These stores could not be obtained in New Zealand, nor would they be available until at least six months after the outbreak of war. Apart from the provision of stores, a considerable amount of leeway had to be made up in carrying out alterations and additions to existing equipment. Shortage of skilled personnel and small stores, and inadequate workshops and machinery, together with the increased demands made upon them, were responsible for the present situation. Unfortunately, financial limitations permitted no progress made in remedying this position. An issue of boots has been made to all ranks of the Territorial Force during the past year which proved satisfactory in every way.

The Ordnance Depots were situated at Ngaruawahia, Trentham, and Burnham. The storage accommodation at Ngaruawahia and Burnham was reasonably satisfactory. At Trentham, where the greater quantity of reserve stores was held, the store buildings consist of the wooden hutments erected to accommodate troops during the war. Most of these buildings still have a considerable ” life,” but the layout is uneconomical in staff and administration and insufficient to accommodate any considerable increase in the quantity of stock held. The stores required on mobilization cannot, under present conditions, be segregated and laid out as they should be. It was proposed that when finance became available, to erect a modern store building at Trentham which will increase the storage available and anticipate the deterioration of the present wooden buildings.

The principal workshop is at Trentham. Small workshops exist at North Head, Auckland, and Burnham, Canterbury. These workshops carry out repair and maintenance work on guns, howitzers, vehicles, machine guns, rifles, optical and other instruments, and miscellaneous small items. A marked increase in this work was expected with the advent of the new armament for coast defences and other equipment. A considerable extension of the workshop at Trentham is overdue,  but could not be undertaken with the finances available in the vote.

The position of the teams at the end of the first round in the 1934/Upper Hutt Cricket League competition was : 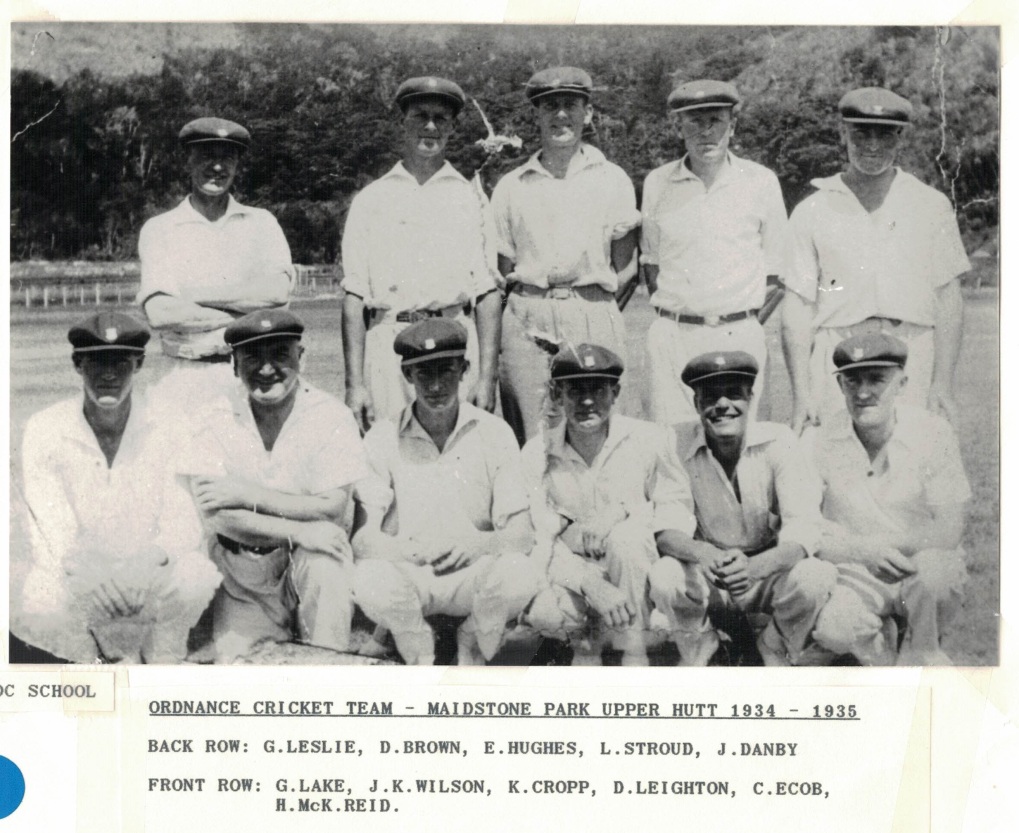 [2] Promoted to Captain 1 December 1934 “Appointments, Promotions, Transfers and Retirements of Officers of the NZ Forces “, New Zealand Gazette No 87, 29 November 1934.