About ‘To The Warrior His Arms’ The History of the RNZAOC

The establishment of the colony of New Zealand in 1840 saw the appointment of the Colonial Storekeeper as the first Government storekeeper with responsibility for providing arms, munitions and accoutrements to the first militias.  Conductors of Stores accompanied British Regiments from their first deployments to New Zealand, with the Board of Ordnance setting up offices in Wellington and Auckland to provide more robust support to the growing number of Imperial troops. The abolishment of the Board of Ordnance in 1855 and the logistical lessons of the Crimean war saw the British approach the New Zealand Wars with a refreshed view to the importance of Logistics, with the Military Store Department providing Ordnance Services to the Imperial and local forces from 1857 to 1870.[1]  The passing of the Colonial Defence Act of 1862, saw New Zealand Forces take on a bulk of responsibility allowing the withdrawal of Imperial forces by 1870.  The growth of an indigenous New Zealand Military also saw the concurrent growth of a Defence Stores organisation which would exist in various forms until replaced by the New Zealand Army Ordnance Corps (NZAOC) as part of the Permanent Forces in 1917.

The contribution of the NZAOC to the success of the New Zealand Expeditionary Force (NZEF) in the First World War has rarely been examined and often just mentioned as a footnote in most contemporary histories. Lieutenant Colonel Alfred Henry Herbert the first Officer Commanding of the NZEF Ordnance Corps and the NZEF Assistant Director of Ordnance Service (ADOS) was tasked after the war to produce a war history of the NZAOC. Unfortunately, this directive was never followed up by the authorities responsible for producing the war histories and the opportunity was missed.

The 2nd New Zealand Expeditionary Force of the Second World War was supported in all theatres by the men of the New Zealand Ordnance Corps (NZOC), with the New Zealand Division in the Western Desert and Italy regarded as one of the finest Divisions of the war.  Contributing to this success was the Ordnance support provided by the NZAOC and NZOC. Immediately after the war, the War History Branch war created and a committee of senior Ordnance Officers agreed to produce an Ordnance War History, appointing Warrant Officer Class One R.F Vincent as the Ordnance historian. Unfortunately, Vincent failed to provide the required history in the time required. In 1949 the War History Branch decided that despite the Ordnance Story being crucial to understanding the importance of logistics in modern warfare there would be little of interest and the project was not pursued any further.

On the home front, a bulk of the files relating to the Defence Stores Department (the predecessor to the Home Service NZAOC and the early years of the Ordnance Corps were lost in the Hope Gibbons fire on 29 July 1952, leaving a massive hole in the History of New Zealand’s Ordnance Services.

This webpage carries on from Major Joe Bolton’s 1992 History of the Royal New Zealand Army Ordnance Corps which provides a useful start point. This webpage expands on Bolton’s work and examines in more detail the Ordnance Support and the men and women who provided it during the of the Colonial era, the World Wars, Korea, Vietnam and Somalia. Not forgetting the domestic landscape, Ordnance Services during peacetime New Zealand and overseas garrisons are also examined.

[1] During the New Zealand Wars that fell between 1840 and 1870, responsibility for the provision of Logistical support to the Imperial Forces in New Zealand fell to two organisations; The Commissariat whose duty was to keep the soldier well fed and the Military Store Department whose function was to keep the soldier well and comfortably clad and amply supplied with the munitions of war. 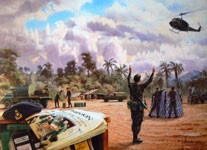