Taking his attestation on 11 January 1915, Gordon would spend three months training at Trentham before embarking on Troopship No 23 the SS Waitoma on 17 April 1915 as part of the 4th Reinforcements for the voyage to Egypt. Disembarking at Suez on 25 May 1915, Gordon would undergo further training at Zeitoun Camp. Early in June Gordon departed Alexandra, joining the 11th (Taranaki) Company of the Wellington Battalion in the Dardanelles on 9 June. 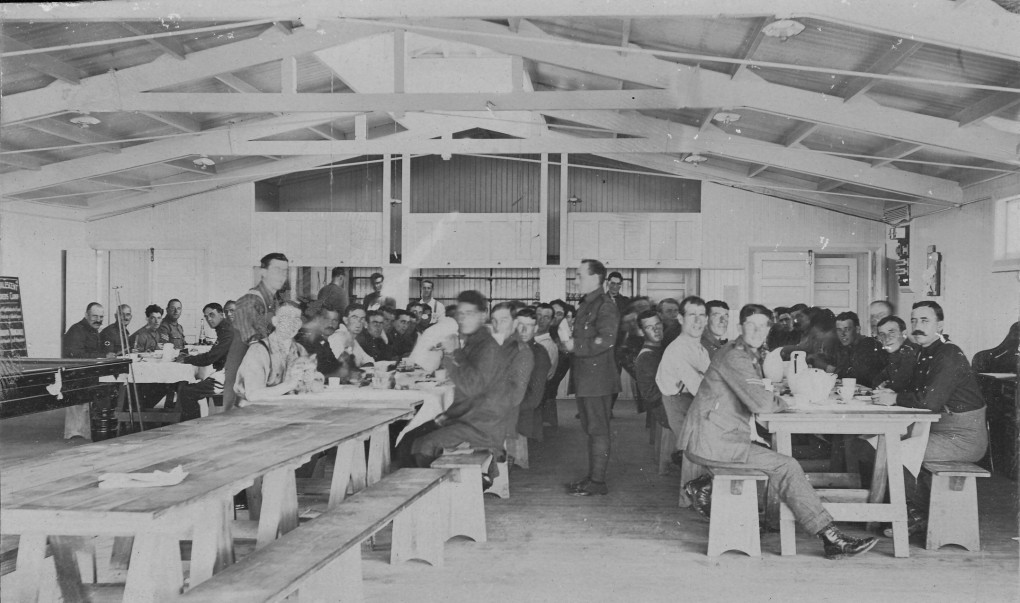 Gordon would have spent the uncomfortably hot months of June and July with the Taranaki Company rotating between Courtney and Quinn’s Posts at Gallipoli as the Wellington Battalion consolidated its position. Participating in the Battle of Chunuk Bair and wounded in action on 8 August,  the injury saw Gordon evacuated from Gallipoli on HMS Alaunia.  Gordon arrived back in Alexandra on 13 August and admitted to the 1st Australian (No.3 Auxiliary) Hospital at Heliopolis on 14 Aug where in addition to his battle injuries Gordon received treatment for appendicitis. Diagnosed with neurasthenia, the term used to describe “shell shock” or what is referred to in modern times as a Post-Traumatic Stress Injury (PTSI) saw the transfer of Gordon to the New Zealand General Hospital at Abbassia on 13 September. With Gordon’s condition classifying him as unfit for service, he was transferred to the Lady de Walden’s Hospital at Alexandria on 8 October in preparation for his repatriation to New Zealand, departing on the SS Tahiti on 20 November. Arriving in New Zealand on boxing day 1915 and admitted to a convalescent home at Rotorua, Gordon would spend several months recuperating. Recovery was slow, and although his health had improved, Gordon remained classified as medically unfit for military service resulting in his discharge from the NZEF on 19 April 1916.

Motivated to continue serving, Gordon re-joined the Territorial Army on 1 June 1916 and applied for enlistment into the NZEF on 10 December, but his C2 medical grading precluded his reenlistment into the NZEF. Gordons records do not record his activities during 1917, but in February 1918 Gordon was medially reclassified as C1 – Likely to become fit for active service after special training. Gordon’s medical upgrading was well timed, as on 15 September 1917 authorisation for men medically unfit for active service was granted so they could replace Territorials who remained on duty at the coast defence forts in the main centres. Gordon was ordered to report to the Officer Commanding of the RNZA Wellington on 26 Feb 2018 and on 27 February 1918, Gordon was enlisted as a guard with the Garrison Artillery at Fort Ballance at Wellington. 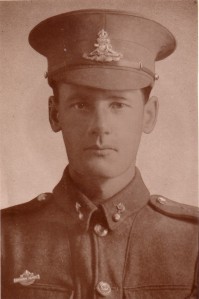 On 31 December 1918 Gordon married Irene Pearl Williams at Wellington. Their marriage would see the birth of eight children and the adoption of another;

After four years, the armistice of 11 November 1918 brought the First World War to a close, and by late 1919 Gordon was at a crossroads regarding his future. As a Bombardier (Corporal) in the Artillery, he was well placed to transfer from the Territorials into the Permanent Force and with his savings purchase a comfortable house and pursue a career in the peacetime army, or he could take his discharge and seek fresh pastures. Gordon chose to seek fresh pastures and with his pre-war experience as a farm hand decided to become a farmer. Utilising the Soldiers Resettlement Scheme, Gordon invested his savings in a farm in the King Country. With marginal and isolated land allocated to returned servicemen, Gordons attempt to develop and farm the land was an experience shared by many other returned servicemen and was a futile and hopeless endeavour. After two years of backbreaking and heartbreaking work, Gordon and his family abandoned their farm and now homeless with savings expended returned to Wellington in October 1922.

Attempting to find work with the Main Ordnance Depot at Trentham in October 1923 and again in March 1924, Gordon was initially unsuccessful, but did secure work at the Trentham Racecourse and later as a foreman with the Public Works Department in Trentham Camp. Gordon eventually secured a position as the relieving Camp Firemaster and in charge of the night patrol, with accommodation for his family provided in a target shed adjacent to the rifle range. The delivery of the first motorised ambulance to Trentham Camp saw Gordon appointed as the driver. In July 1925 Gordon’s luck changed as he was accepted for service into the New Zealand Army Ordnance Corps (NZAOC) and was attested as a Private into “E” Section of the Main Ordnance Depot on 21 July. Up to his enlistment in the NZAOC Gordon had remained efficient in the Territorial Army with his service between 1916 and 1925 equalling four years and 211 days. 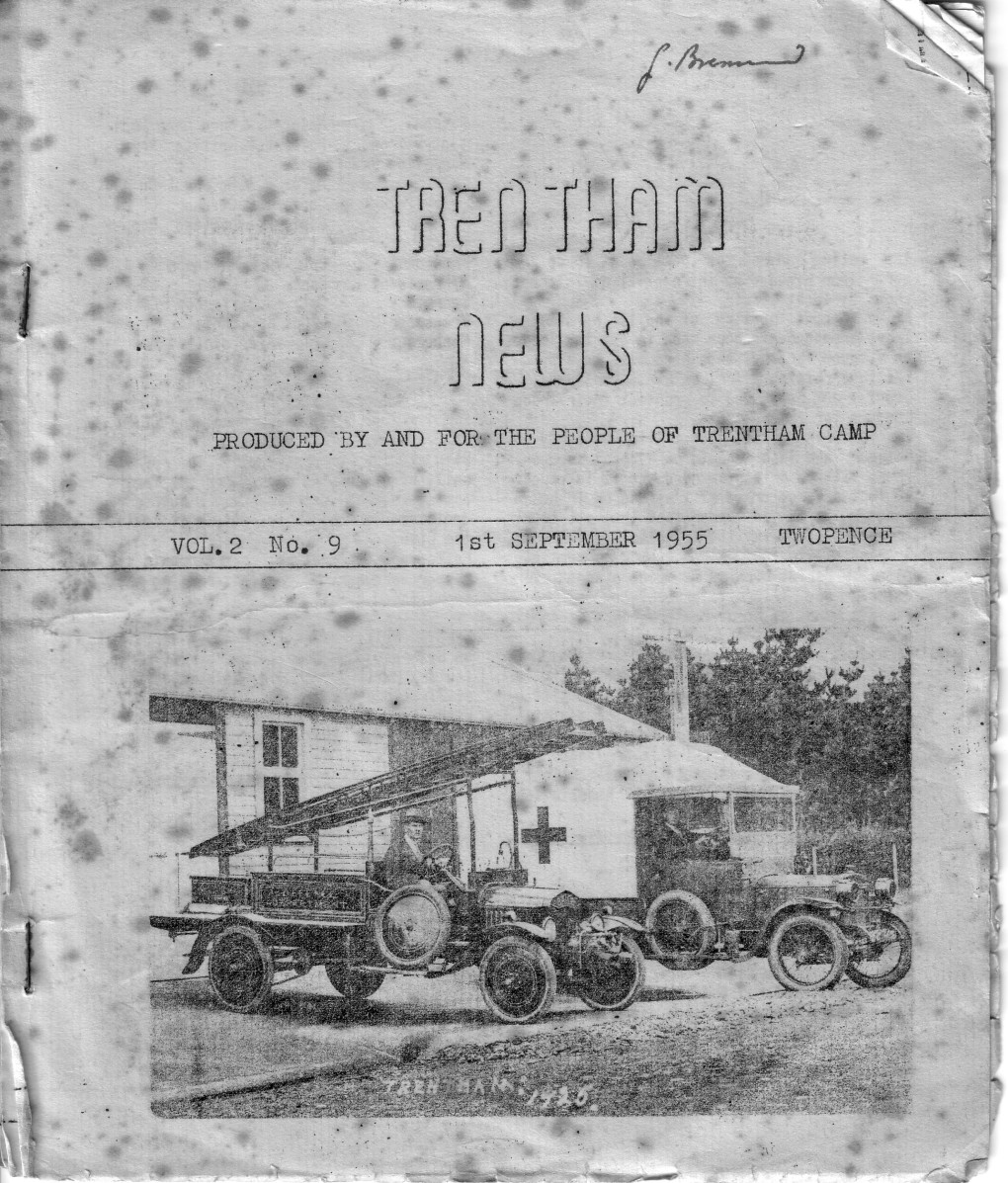 Gordon’s enlistment into the NZAOC would in normal circumstances allowed him to retire at the age of 55 with a comfortable pension, but this was not to be. Due to the world-wide depression and economic recession the government was forced to savagely reduce the strength of the Army by using the provisions of section 39 of the Finance Act, 1930 (No. 2)  military staff could be either;

Using this act, Gordon was discharged out of the NZAOC and transferred to the Civil Service on 31 January 1931 to work in the same position as a lorry driver but at a lower rate of pay. 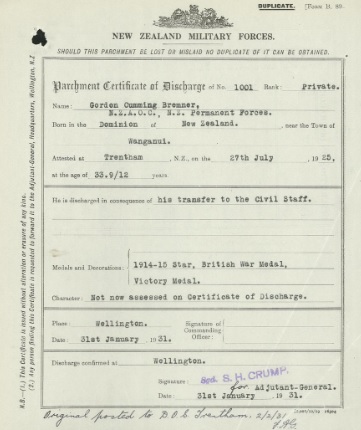 Less than a week after Gordon’s transfer to the NZAOC Civilian staff, a disastrous earthquake struck Napier and Hastings on 3 February 1931. The NZAOC was called upon at short notice to supply tents, blankets, bedding, cooking and eating utensils, for use in the stricken areas. As part of the civilian ordnance staff, Gordon’s skills as a lorry driver were put to full use delivering these stores and equipment to Napier and Hastings. All military employees including the civilian staff such as Gordon who engaged in the relief effort were deserving of great credit for the manner in which they carried out their duties under trying conditions.

Gordon’s wounds continued to cause him issues, and in February 1933 Gordon was admitted to hospital for an operation on a duodenal ulcer which was causing him some discomfort. As a result of the surgery a souvenir of Chunuk Bair, a piece of Turkish shrapnel was removed from Gordon’s stomach.

Gordon would continue to serve with the NZAOC in a civilian capacity for the remainder of the 1930’s. Although New Zealand entered the Second World War in 1939, the NZAOC would not transition into a full wartime footing until 1942 when, with the threat of invasion by Japan perceived as possible, saw the mobilisation of the full military potential of New Zealand. The NZAOC would transition from an organisation primarily staffed by civilians into one with a predominately military establishment, with many of the NZAOC civilian staff including Gordon returning to uniform. Gordon was attested into the Temporary Service of the NZAOC at Trentham on 24 August 1942 and allocated the service number 814628. Promoted to Corporal on 1 September 1942 with promotion to Sergeant following on 1 August 1944.

With the end of the Second World War, Gordon transitioned into the post-war Interim Army as a Sergeant on 26 June 1946 and then into the Home Service Section (HSS) of the Regular Force as a Sergeant in the Royal New Zealand Army Ordnance Corps (RNZAOC). As a driver in the Receipts and Issues Group of the Main Ordnance Depot, Gordon would often be out on runs around the Wellington region collection and delivering store to units and to transports agencies such as the railway, his pleasant manner, willingness to oblige and friendly ways ensured that he was a respected and popular member of Trentham Camp. Gordons activities were not limited to Trentham Camp and throughout his post-war service at Trentham, he would undertake many tours of duty to the other Ordnance depots at Linton, Waiouru and Hopuhopu. Receiving three extensions to his service Gordon would serve throughout the 1950’s. 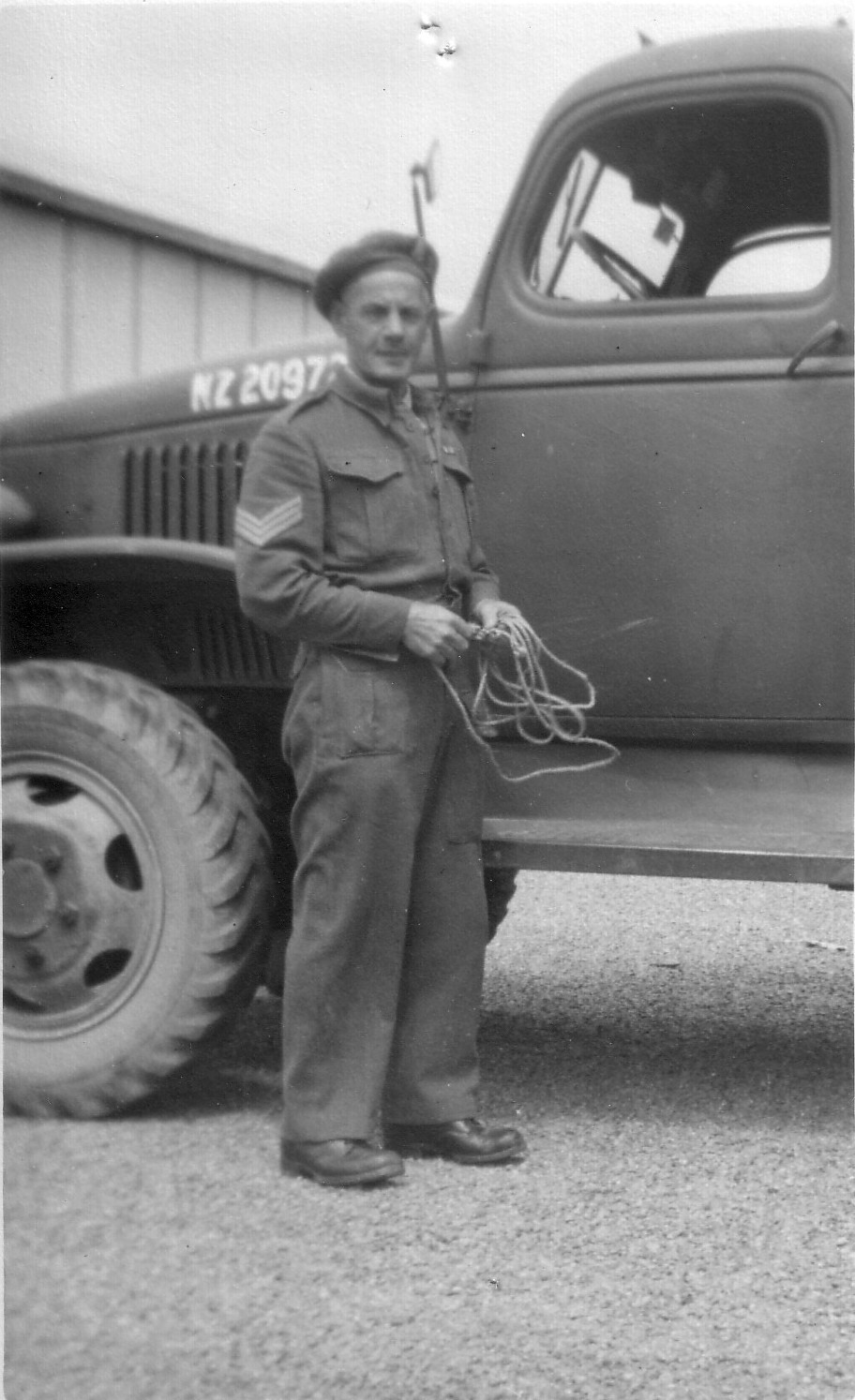 In 1955 a review of Gordon’s service was undertaken, and in acknowledgement of his Sixteen Years and Nineteen days qualifying service in the Territorial Army, NZEF and NZAOC from 1911 to 1931, Gordon was awarded the New Zealand  Long & Efficient Service Medal on 12 May 1955. The New Zealand Long and Efficient Service Medal was rendered obsolete with the standardisation of awards on 23 September 1931 and Gordons award of this medal is notable as due to its late claim, Gordon’s award was the last one of this type awarded.

Reaching retiring age in 1956, Gordon was discharged from the New Zealand Army on 6 August 1956 after close to Forty-Five years service, the majority of which spent at Trentham Camp to which he had been a witness of its growth form a rudimentary Training Camp in 1915 to a modern Military Camp.

Gordon retired in Upper Hutt and passed away at the age of 76 on 28 November 1967. Gordon now rests at the Wallaceville Cemetery, Upper Hutt, Wellington, New Zealand.

During his service Gordon was awarded the following medals;

Gordon had also been issued with the Silver War Badge. The Silver War Badge, also known as the “Wound Badge” or “Services Rendered Badge” was issued during the First World War to personnel who had been honourably discharged due to wounds or sickness from military service.

In August 1967 Gordon received his Gallipoli lapel badge in the post with a letter apologising for the delay in sending out the Medallion. Gordons Gallipoli medallion would arrive a  week after his funeral. 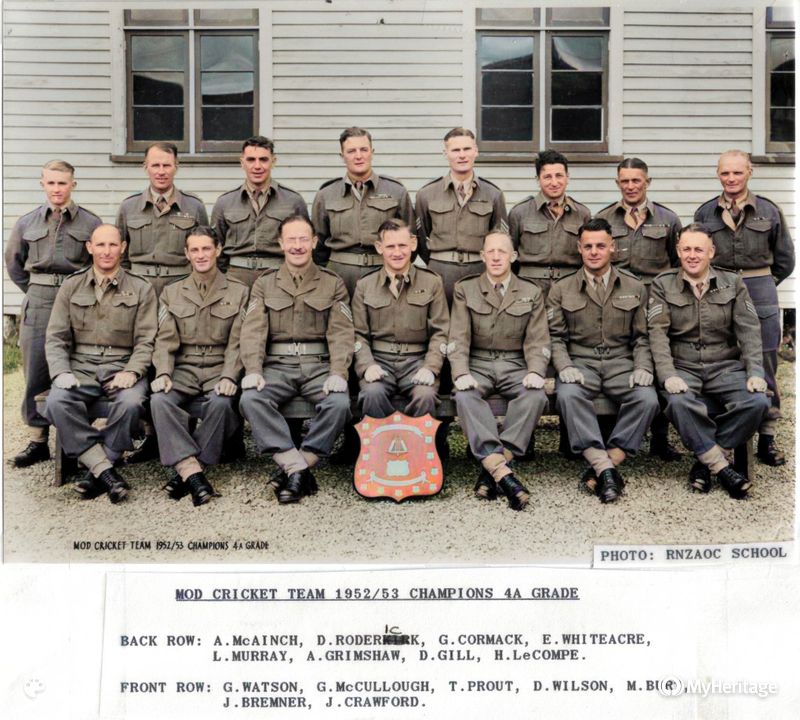