A patron saint is an individual who in the Christian tradition is considered to be the heavenly advocate for groups of the faithful (families, parishes, regions, countries).

The tradition of patron saints traces its origins back to the Roman Empire and the building of the first public churches. As many of these churches were built over the graves of martyrs, they were given the name of the martyr, with the expectation that the martyr would act as an advocate for the Christians who worshipped there.

By the Middle Ages, organisations began to adopt patron saints to seek the protection of heaven for the ordinary interests of the organisation and for the health of members of that organisation.

Adopting the tradition of the Royal Army Ordnance Corps, Saint Barbara was adopted as the Patron Saint of the RNZAOC.

Saint Barbara’s day is commemorated on the 4th of December.

The Legend of Saint Barbara 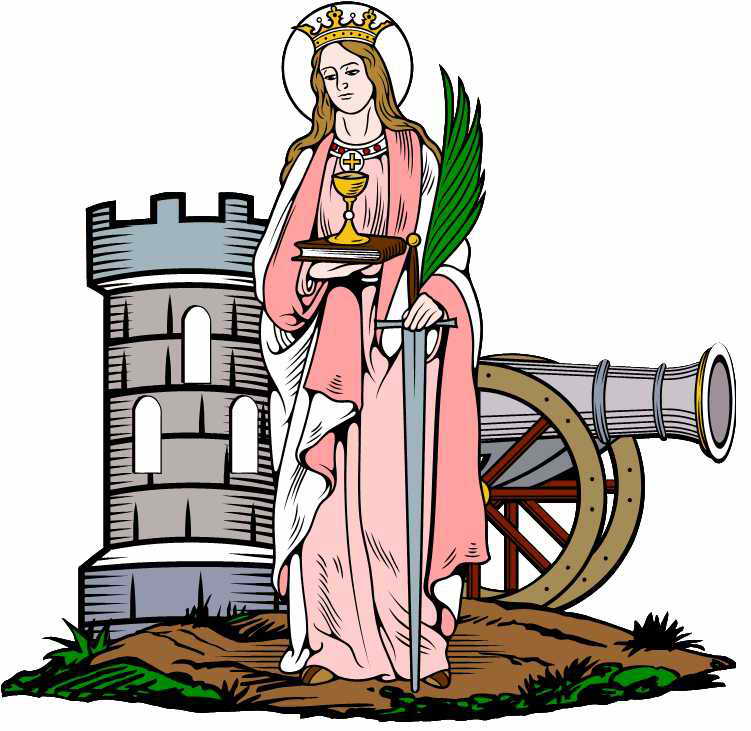 Living during the reign of the Roman Emperor Maximian,  (305-311) Saint Barbara was from Heliopolis in the Roman province of  Phoenice, which is now Baalbek in modern Lebanon. Living in the time when the Roman Empire was transitioning between paganism and Christianity, Barbara came from a wealthy merchant family following the beliefs of Roman polytheism.  Her father was a rich and well-known merchant named Dioscorus, who after the death of his wife devoted himself to his only daughter.

By all accounts, Barbara was not only extremely beautiful and also extremely intelligent and her father vowed to protect her from the outside world by imprisoning her in a tower, forbidding her to associate with anyone apart from teachers and servants who had instructions that she be taught how to worship to the pagan gods. The view from the tower was a picturesque one of wooded hills, rivers and fields covered in colourful flowers stretching as far as the eye could see. With such a view Barbara soon questioned the creation of such a beautiful world. Over time, Barbara became convinced that the idols she had been taught about were merely the work of human hands and could not have made the surrounding world. As she was reaching adulthood Dioscorus began to seek out suitors and potential husbands for his daughter. Refusing them all, she warned her father that she was seeking something else and that his insistence on marriage could forever damage their relationship.

Sensing some conflict in his daughter, Dioscorus allowed Barbara some freedom and hoped that by allowing her to leave the tower she would change her attitude. Using the opportunity to meet new people, Barbara was soon mixing with people from the emerging religion of Christianity.  Learning about the message of Jesus, the Holy Trinity and the Christian Church, Barbara was converted and baptized by a priest from Alexandria who to avoid detection was disguised as a merchant.

Accepting Barbara’s new freedom, but still not knowing that she had been baptized Dioscorus took the opportunity to depart on some business travels, leaving instructions for a  private bath-house to be built for his daughter. Originally planned to have only two windows, Barbara inspired by her new religion had the workers add in an additional window, to represent the Christian Holy Trinity. Barbara’s bathhouse became a place of healing, with many miracles occurred there. The 10-century scholar  St. Simeon Metaphrastes placed it on an even footing to the stream of Jordan.

Returning from his travels Dioscorus returned to find the bathhouse built to a different design and the news was broken to him by Barbara that she was rejecting the worship of his idols and that she had been baptized as a Christian. Upset with this revelation, knowing the shame it would bring on to him, Dioscorus fell into a fit of rage, taking his sword with the intention of striking Barbara.

Running away before her father could strike her, Barbara headed for the hills with her father in pursuit. Chasing after his daughter, Dioscorus pursuit was cut short when a hill blocked his way. According to legend the hill had opened up and hid Barbara within a crevice. Continuing to search for his daughter to no avail, Dioscorus sought the help of two local shepherds. The first, knowing where Barbara was denied any knowledge of her whereabouts, the second knowing of Dioscorus wealth and possible reward, betrayed Barbaras location to her father, for his betray legend has it that he was turned to stone and his flock was turned into locusts.

The Torture of Saint Barbara

Finding his daughter, Dioscorus locked her up whilst starving and beating her. Given that being a Christian was then a crime, Dioscorus had little choice but to hand Barbara over to the prefect of the city,  Martianus. With the cooperation of Dioscorus, Martianus continued with the beatings and torture. Refusing to renounce her Christian faith, Barbara prayed to Jesus. As the beatings continued during the day, each night her wounds were miraculously healed. Incested that her wounds were healing,  Martianus subjected her to new tortures to convince her to renounce the Christian faith. Refusing Barbar drew strength from her prayers and stood firm. These tortures were carried out in the public arena and as Barbara was being tortured a virtuous Christian woman in the crowd called Juliana took sympathy on Barbara.  Inspired by Barbara’s voluntary martyrdom on behalf of all Christians, Juliana denounced the torturers in a loud voice, resulting in her seizure and torture alongside Barbara.

The Execution of Saint Barabra

Both women were now being repeatedly tortured with their bodies were raked and wounded with hooks, and stripped naked and paraded through the city where they were greeted by derision and jeers.  Holding out and not forsaking their faith, Barbara continued to pray and legend has it that an angel appeared and covered their nakedness with a splendid robe and extinguished torches that were about to be used to burn the pair.

Tiring of the lack of progress with the torture, Martianus ordered the execution of the pair. Barbara and Juliana were beheaded on the 4th of December, with the final blow to Barbara delivered by Dioscorus. Another Christian, Valentinus buried Barbara with her tomb becoming the site of many miracles.  Dioscorus and Martianus were also punished, as it is said that shortly after the execution they were struck down and killed by lightning, seen by many as Gods revenge for the killings.

Barbara seems to have been canonized by the 7th century and her story introduced to Britain during the time of the Crusades.

Saint Barbara’s association with the lightning that killed her father established her association with lightning and fire. As Christianity became firmly established, Saint Barbara was invoked as a protectress against the perils of lightning. When gunpowder was introduced in the Western world, this led to her adoption as the patroness of artillerymen. Eventually, her patroness would be extended to many who were in danger of sudden death, including firefighters, sailors, armourers, military engineers, gunsmiths, tunnellers, miners and warehouse workers.

Given the Royal Army Ordnance Corps association with explosives and artillery, Saint Barbara was adopted as the Patron Saint of the RAOC, a tradition that was carried over to many of the Commonwealth Ordnance Corps including the RNZAOC.

Surprisingly there is a connection between the New Zealand Ordnance Corps and Saint Barbara. During the Second World War, C Section of the New Zealand Divisional Ordnance Field Park and the NZ Advanced Ordnance Depot would spend a short time deployed in the vicinity Baalbek in modern-day Lebanon, which is the attributed as the place where St Barbara lived.

Saint Barbara of Heliopolis of Phoenicia